My God, it’s been nearly four months. I mean, I’ve been busy, but not that busy. Anyway, here’s some reading done. 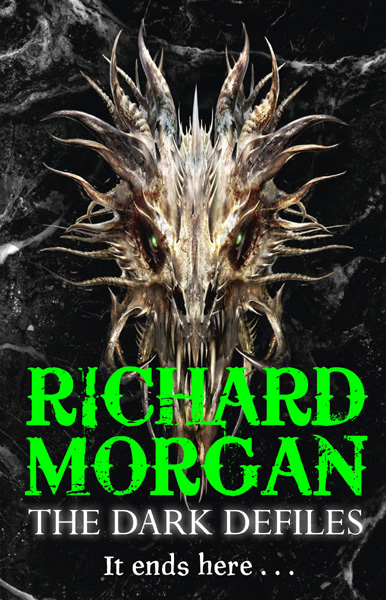 The Dark Defiles wraps up Richard Morgan’s trilogy of delightfully visceral fantasy novels that started with The Steel Remains. I loved that, really loved The Cold Commands and so the last was an easy Christmas present. It did take ages to read, but this was a combination of a pile of work, other things eating into my reading time, and the fact that this isn’t a short read; it can’t be much under 180k words if it’s not more.

The series’ strengths have always been its very grounded characters, its conflicted background (there are no all-out good guys here), and its punchy writing, and all of those are present and correct here too. The first is especially impressive given this is the culmination of a fairly epic fantasy tale, and even though the fate of the world hangs in the balance and Gil, Egar and Archeth have seen their fortunes rise and fall throughout, there’s no pomp or posturing here at all. Motivations remain base and human.

I thoroughly enjoyed it and I’d happily recommend it to anyone so long as they don’t mind a whole load of sex, violence and bad language (and I suspect I don’t know that many who do).

But, but. I had one quibble, and I think it’s one in some form or another others have had too: I wish it had been longer. The story ends where it does because Gil’s story ends there, and I get that and I get the intent to keep the epic stuff as backdrop in a sort of subversion of the norm. But the backdrop drives so much of the actual narrative that to leave all but one facet of it (the Aldrain) completely unresolved left it feeling incomplete, like there was a fourth book coming.

The whole reason the characters end up where they are at the end of the second book and the start of the third is that their Kiriath helmsman (a sort of AI, if you like) is trying to set those on the expedition up as a cabal to overthrow mad Emperor Jhiral and put Archeth on the throne so she can carry on the Kiriath mission of shepherding humanity (minor spoiler; this is revealed early). She refuses to have anything to do with it when she finds out, and by this point Jhiral has for some reason launched a war with the League causing them all sorts of problems, the fate of nations hanging in the balance, shaping their every choice and action… and the story ends with no one less than a thousand miles from home and everything still going on.

There’s all sorts of talk about how the church suppressed in The Cold Commands will use it to reestablish their importance and threaten this and that, talk about what it’ll do to the League, to Jhiral’s reputation and… you’ll have to fill all that in yourself.

Don’t get me wrong, I loved the book. I do wish those elements had either been reduced in terms of the space allocated or else tied off just a little more, but to be frank “I wish there’d been more” - and who ever asked for more political outcomes in their fantasy reading? - is scant complaint indeed. Thoroughly impressive.

I know, it’s a classic, I’m late to the party, blah blah blah. Still, I’ve now read it and you should too.

Winter’s Bone is about as opposite to The Dark Defiles in terms of its scale, size, and setting as it’s possible to get. It’s a short, sharp piece of work dealing with the fate of the Ozark family led by eldest daughter Ree Dolly after the disappearance of her court-bound meth cook father and the complex web of interconnected local family offshoots she has to deal with to get to the truth before she loses their house because her dad used it to pay his bond.

It’s pretty bleak stuff, dealing in rural poverty, family ties, and what it takes to get you through as much as it does (or more than it does, really; it’s all-consuming backdrop, but backdrop nonetheless) life in the meth business.

It’s also a fine example of a story told in part by omission, and without a final confrontation between two sides. While it’s the fate of Ree’s father that propels her, and (minor spoilers ahoy) it does indeed turn out he’s dead as she suspects for a reason that would give people motive, she never finds out, and you never find out, who killed him; Uncle Teardrop tells her he knows, and by inference he’s not expecting to be returning, one way or another, from dealing with that, but that event isn’t a part of Ree’s story.