Like a proton torpedo streaking towards a ray-shielded exhaust port, I’m away. Which also means I’ve been reading. Some has been rereading - Gibson’s excellent THE PERIPHERAL and the also excellent (though I’d be interested in an updated version now 3-man defences are back at least partially in vogue, rather undermining one of its later arguments) INVERTING THE PYRAMID - and some has been delicious, fresh wordmeat. Short reviews follow.

Loved THE ROAD. Loved NO COUNTRY FOR OLD MEN. Gave BLOOD MERIDIAN up about halfway through. Not because of the violence (which, even if that sort of thing bothered me, is fairly mild, certainly compared to some of that in THE ROAD, even with the odd scalping), not because of the grimness (again, THE ROAD has it beat overall despite the bleakness of the desert), but because I was bored and had nothing invested in the main character, or any of the minor ones.

Moss et al. are great in NO COUNTRY, and the man and boy in THE ROAD are what keep you pushing on, hoping they’ll make it, but the kid here is a blank. He’s a borderline psychopath, unaffected by anything around him (the closest he comes to an emotional response anywhere in that stretch is getting angry when a Mexican tavern owner refuses to give him a drink after he’s swept the floor), and his detachment from events left me equally detached. Without any reason to give a shit about what he experienced, there’s nothing about the story to keep me going - it’s functionally a road trip through Texas, Mexico etc. with no underlying narrative to it; he just does whatever turns up as it turns up, just because.

And yes, people are monsters and times are tough. But without anyone to identify with, who cares? 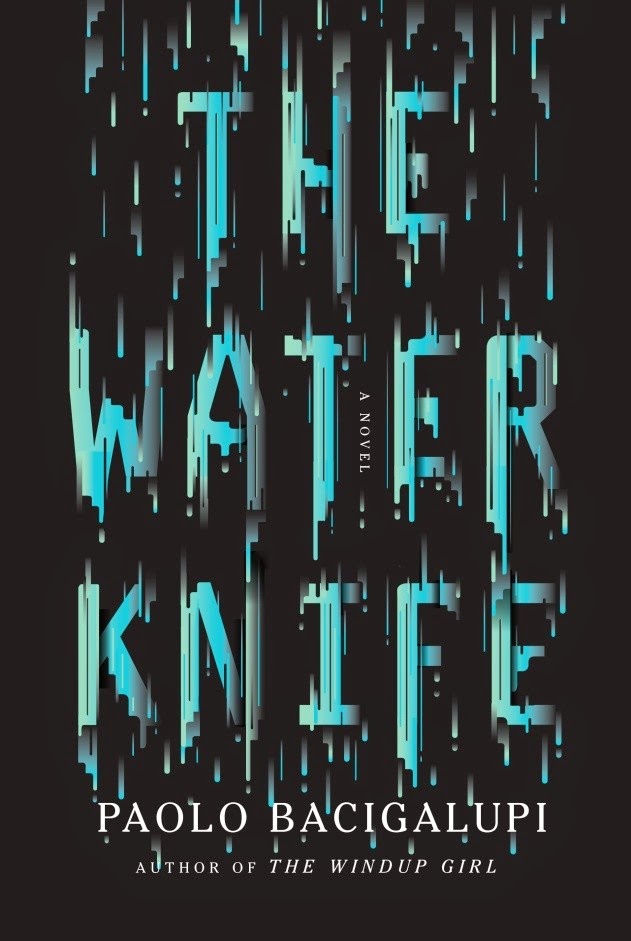 Times are also tough in the Arizona (and other Colorado River basin states) of the drought-ridden near future, where states war over water rights and Phoenix is the next city to be facing extinction. Thankfully, in former blood-rag journalist Lucy, Texan refugee Maria, and ’water knife’ operative Angel, working for the ruthless ’queen’ of Nevada, there are three really strong, varied characters to experience the slow collapse through, and in the MacGuffin that gets one of Lucy’s friends brutally murdered - ancient senior rights that could see their holder switch off the taps for anyone anywhere along the river - there’s an overriding dramatic driver for the plot.

(Not that those rights are a perfect MacGuffin; I can’t see how anyone is able to claim them just by owning the paper they’re printed on when surely they’re a contract between the parties in question. Small quibble, though.)

The world created by Bacigalupi is harsh, violent and largely entirely believable, and there’s plenty of nuance to the characters and their situations. If I were to gripe, I’m not sure the final set of betrayals and standoffs at the end was entirely necessary - after a lot of such things already - and the climax is perhaps a little convenient on the whole. That’s splitting hairs, though. This is good stuff and well worth reading.

Next up, because I’ve somehow failed to forgotten to copy Jay’s latest onto my phone, is Don Winslow’s THE CARTEL. Apparently, terrible things on the US/Mexican border is a running theme. Won’t have as much reading time soon, though; back from break and back to work next week.