Reviews: STATION ELEVEN and ACROSS THE RIVER AND INTO THE TREES

Review time! Since the start of the year I’ve been trying to eke out half an hour to read each day between Aidan going to bed and me getting back to work. So far it’s mostly been successful. Consequently, I’ve finished a couple of books in the last week or two. 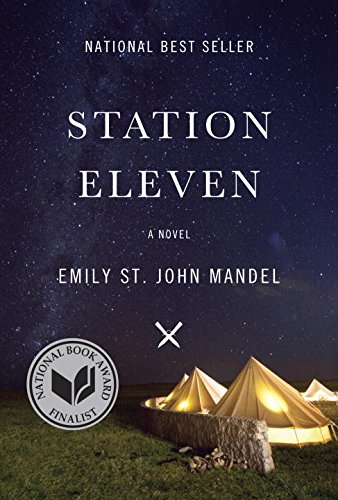 A little-known book that hardly anyone has read and whose lack of press has been mystifying. I’m joking, of course; I’m also way, way late to the party on this. Nevertheless, it’s a great book. A strain of superflu wipes out most of humanity in the space of a week or so, and twenty-odd years later, a touring company of actors and musicians goes from settlement to settlement in the ruins of the Great Lakes region.

So far, so apocalypse. But this isn’t really an apocalyptic novel. It’s a character piece, following various people tied loosely together by an actor who dies onstage the night the flu breaks. One of the children in the production (the main character, such as there is), the ex-paparazzi paramedic who tries to save him, his former best friend, two of his ex-wives, and his son, and Arthur himself.

The prose is butter-smooth and quite wonderful to read, the characters are all well-drawn and suitably complex, and particularly nicely, it’s not apocalypse porn. There’s the opening section with Jeevan (the ex-pap) which largely explains the disaster, and some “here’s what happens to them” showing the flu hitting through the eyes of most of the others when their individual stories (told largely as flashback) reach that point, but of the years between zero and twenty, very little is said outside a Year Fifteen interview with Kirsten, the former child actor. The world of the Symphony and Kirsten (who never, despite a skill with knives, falls into Hunger Games fighting woman cliché come the nicely understated climax) is tough, but it’s not a case of fending off raiders and scavenging for food every three pages. Things have settled down, and while there are lawless elements, and the main antagonists, it’s just a different world, not a total ruin. And the world before it, of Arthur and those who pass through his orbit, is equally fascinating and leads you to care for all these people, even the ones who don’t make it.

Very, very good. If I had to split hairs - and I don’t but will because I’ve come this far - the ending reads a little uncertainly to me, as though Mandel wasn’t quite sure what point to close on (various things are tied up in summary, in turn, Return Of The King-style, that might have been left), Arthur’s final day decision to throw off his worldly riches and fame and move to be with his son just before he dies felt unnecessary and somewhat out of character - he was better, I think, as a flawed but ultimately decent sort struggling with the life he’d chosen, and I have the strong impression that the short glimpse of Jeevan’s life in Year Twenty felt like a later draft addition. I imagine an editor saying, “You can’t just leave him walking out of Toronto and never show the reader what happened to him!” What we see of his life a thousand miles away is largely without consequence - he’s happy enough, settled enough, and far from the main location of the Symphony’s orbit - and his one-step-removed passing encounter with the main antagonists read a little tacked-on.

Those are really all the hairs I can split, and they are tiny and really didn’t spoil a thing (note, too, that they’re all late-on in the book, by which point it’s built up more than enough credit to buy them off). It’s a great book and thoroughly deserves all the praise it’s had. I’ve not read any of Mandel’s other novels, but I’d do so happily on the back of this one.

Across The River And Into The Trees (Hemingway)

Another little-known author. This is famously one of Hemingway’s most criticised novels, and also the one in which he most attempted, and failed, to apply the Iceberg Theory to his writing. Colonel Cantwell, who has a bad heart and various old wounds after serving in both world wars, particularly the first in Italy, is on his way to Venice for some duck hunting. Here he meets up with the young contessa, Renata, he’s in love with, and reminisces, with her and others, and alone, about his military past. The shoot, when it finally happens, leads to him having a heart attack and dying.

Seriously, there’s not much story there, but that’s not uncommon in Hemingway’s work. I’ve read a couple before, and I enjoy his style of writing. The Colonel is a great character, mostly, truculent, abrasive, but warm and caring when he wants to be, probably the best character I’ve come across in Hemingway. It’s interesting to see, too, how many of his conversations are similar in tone and approach to those in Fear And Loathing In Las Vegas (which I reread for the zillionth time earlier in the year). He’s a lot of fun to follow.

Until he starts talking about love with Renata and it all falls apart for chapter after chapter. Most of Hemingway’s dialogue is great, naturalistic and free-flowing. But as soon as a man gets emotional with the woman he loves, they both turn into infatuated, “no, I love you more” teenagers. There are elements of it in other stories, but it’s at its worst by far here, and there simply isn’t enough to justify it. Wikipedia tells me Renata was based on a real 19-year-old Hemingway was obsessed with at the time of writing, and I’d have to say it shows in buckets.

However. However. Despite there being not much of a story as such, Cantwell’s a good character, his history and its interweaving with that of the Veneto is engaging, and there’s plenty to keep you rolling along. Hemingway is never, at the very least, prone to waffle. Just skip the “I wuv oo” mid-section if you don’t want to be grating your teeth as you read.

Next up, another little-known novel by an obscure writer: I’m a little way into No Country For Old Men.